This fabulous  Mid-Century rocking chair looks back to the Jugendstil designs of the Thonet Brothers. It comes with a caned back and seating panel and boasts a solid bent beechwood (?) swirling frame very much in the style of Thonet as can be seen in the image below also known as the ‘Katalogseite Schaukler’ of 1886. Its exact prototype is unknown however it bears striking resemblances to The ‘Schaukel-Fauteuil No. 1’. 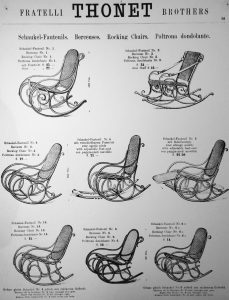 This rocking chair is the first bent beechwood, solid cane-woven rocker, created by Michael Thonet in 1860 in Koritschan, Moravia. The early rockers were stained dark — either black, hazelnut or mahogany, in contrast to the lighter woven cane seats and backs. The rockers curve around the side of the seat, round over the front and sweep into an open, slightly upturned end, finished with a small scroll. The sinuous arms and spiraling front legs and seat supports taper at the tips into nearly closed curved hooks. Sales of the first bentwood rockers were slow, but, as the style gradually caught on, Thonet added tufted upholstered seats and backs and changed the configuration of the curving wood.

As well as the classic coffee house chair, the rocking chair established Thonet’s worldwide reputation. Both became the epitome for innovative bentwood technology. In spite of the large-scale production, these chairs, manufactured in a wide variety of forms, convey comfort and warmth. No other industrial product for the home was as successful in becoming such a large part of living culture in the 19th and 20th centuries.

Michael Thonet, an Austrian cabinetmaker who lived from 1796 to 1871, was obsessed with innovative design. In 1830,Thonet experimented with ways to steam and bend beechwood from the local forests into curved and sturdy, graceful chairs. By 1853, he had opened his own shop, Gebruder Thonet, and by 1860 was producing bentwood rocking chairs with woven cane seats and backs. Thonet’s innovations included the first, affordable, factory-produced, assembly-line chairs that could be shipped in pieces and easily assembled. The product range included sets for chairs, armchairs, bench seats, tables and rocking chairs as well as stools, children’s furniture to easels, prayer stools, dressing table mirrors, umbrella stands, music stands and newspaper stands, fire screens and screens. Thonet’s customers included cafés, restaurants, hotels, theatres, authorities and administrative offices, but above all private households. As a designer, his maxim whilst creating was ‘form allows function’.

A Bentwood Rocking Chair in the Style of Thonet, c.1900